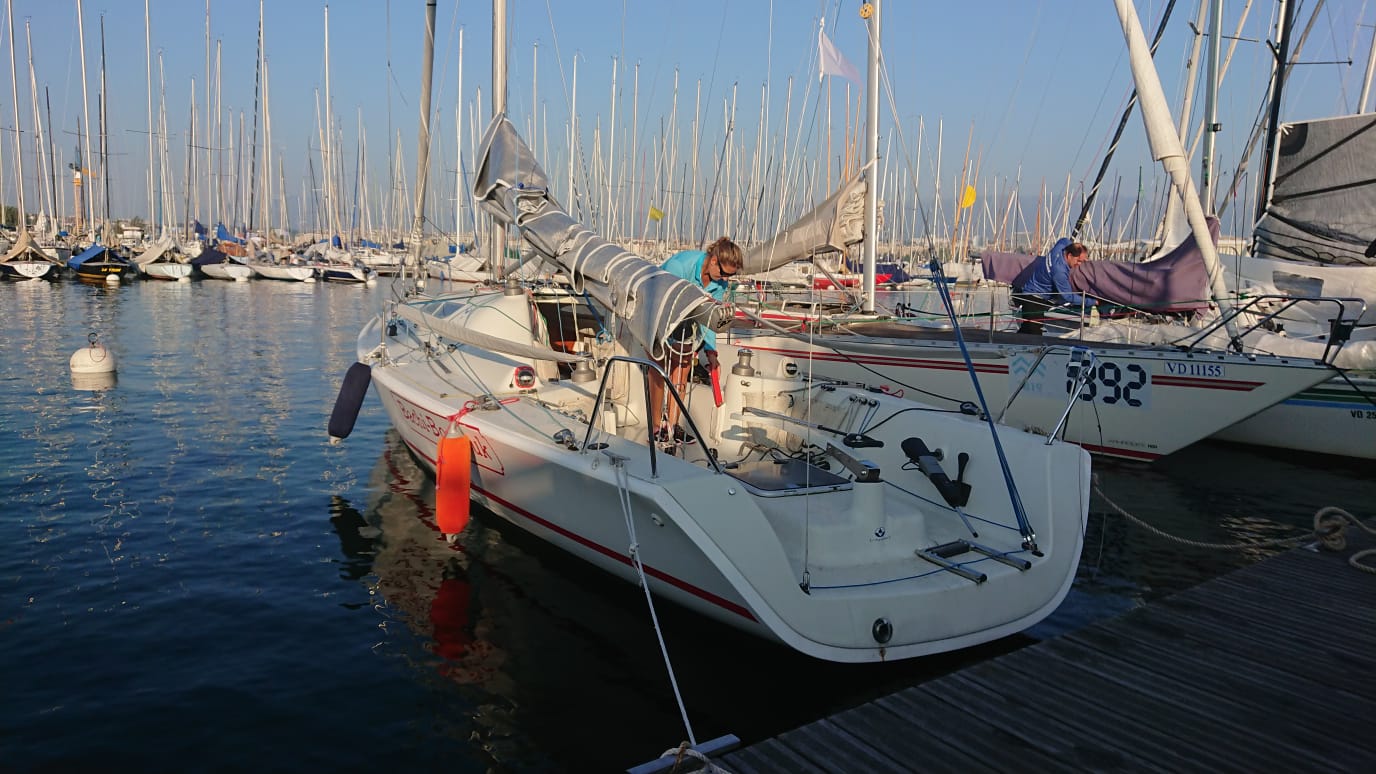 I consider myself extremely lucky to take part in some incredible events. Often the easy route would be to say no but sometimes you have to challenge yourself.

Incredibly, it has been ten years since I sailed competitively on my own in a yacht race so I will admit to feeling a little apprehensive when I was invited to take part in the SYZ Translemanique en Solitaire. The event takes place in Geneva, sailing the length of a lake I had never sailed before, on a boat I had never sailed – what could possibly go wrong?

I was extremely nervous on arrival but hoped that the sailing would be like riding a bike and it would all come flooding back to me once out on the water. I was sailing a Grand Surprise, a one design 30’ race boat, among 11 entries in our class. That put us all on a level playing field with the only differentiating factor being how the boat is sailed and the tactics utilised in positioning around the lake.

I was lucky enough that Joshua Schopfer spent two hours sailing with me on the boat on the Friday afternoon ahead of the race, taking me through the processes on the boat and how the system runs. He also spoke briefly about sailing on the lake but, what became clear was the fact that as much as a forecast is given, the lake is a law unto itself. Anything can happen and it generally does.

Being a mountainous area with cold air up high and the temperatures in the towns and villages being hot, weather cells establish with some local winds rotating. One end of the lake is very different from the other despite only being 40 miles away. Equally, when conditions are light, one boat may have different conditions compared to another boat just 200 metres away. Energy accumulates during the day and creates storm clouds that build at night, with lots of lightning and some thunder. No moon over the race weekend made conditions at night super dark.

I was blown away by the welcome I received from my fellow competitors and the organisation at the Societe Nautique de Geneve. They were friendly and keen to share advice and I was happy to accept all the help I could get. Only 7% of the entries were female, which is a shame, but the role models that did take part were great and encouraged others to try the annual event when it runs next year. Anne Chiari Gaggia was extremely helpful to me and shared a wealth of information as well as introducing me to many others who were all willing to impart some knowledge. I thank them all.

Start day began early, not that I had really slept the night before. A combination of nerves and excitement kept me tossing and turning. I set up the boat ready for racing and did my obligatory interviews. The weather was forecast to be super light until after lunch and then we would see upwind conditions through to the other end of the lake.

The start area was like glass and I did not want to be too far from the start line as moving was going to be tricky. The countdown went by and we all got a clear start. I was middle of the line on the line but with no momentum. Everyone caught up and I was in amongst a huge number of sails with no chance of clear air. This was going to be a long morning. I noticed a group of boats head off to the Swiss coast (the north coast of the lake). This break away group were the ones who took the early lead in the fleet by having some more pressure to start with. I was unable to get over to them so had to live with where I was. I had headsails up and down, spinnakers up and down, I tacked and gybed all just trying to keep my boat moving. It was very hot and I was consuming masses of water just to keep going. It was not until just after 1400hrs that the new breeze came in. At this stage, we started sailing upwind and slowly the wind built to feel established allowing us confidence to sail to the other end of the lake. I made the decision to stay to the south side of the lake pushing to be on the inside of the curve and sail the shortest distance. This involved lots of tacking and playing the shifts, however small.

The closest I got to the coast was at Evian, which was beautiful, and I was delighted to get to the other end of the lake just before dark so that I could enjoy the dramatic drop of the mountains into the lake. The scenery was absolutely stunning. Lake Leman is split into three areas. We sailed from the narrow little lake through to the big lake where Lausanne occupies the coast, then we moved into the high lake. It was in this final area that we experienced La Vaudaire. This is a strengthening wind from the Rhone valley rolling down from the mountains. We had a building wind, it was dark and I had to find the turning mark against the coastline whilst tacking with a group of about five boats. The boat was fully depowered, with the controls back on and the back stay on, it was getting stressful and I had a couple of ugly tacks in the stronger winds. I was totally relieved at 2210hrs when I finally rounded the mark and bore away. I gybed and set my course back towards the distinctive lights of Lausanne. My plan was to stay in the stronger band of wind while we had it. After about 20 minutes the wind dropped and I hoisted the spinnaker again. I then sailed downwind all the way to Lausanne. Lightning lit up the sky behind me and the clouds looked dark with rain ahead. I also realised that the boats I had been sailing with to the mark had all disappeared. I was on my own. All I could do was try and be on the making gybe or tack to the finish. I had been warned of the false headland of Yvoire. It often looks like it could be Geneva but in fact the finish line is hidden behind this headland, so it is safer to sail more on the Swiss side until you see Geneva lights come into view.

Once I was back in the big lake between Evian to the south and Lausanne to the north, the wind shifted quickly. I went from sailing with the spinnaker to sailing upwind. Now this was forecast to be the weather to the finish line, tacking all the way. I played the making tack as much as possible and tried to reduce my manoeuvres. The lake was quiet and I only saw one fellow competitor.

As I sailed to the finish line the wind was getting lighter and lighter. With the final gate entered I tried as much as possible to make the finish line in one but the glassy conditions got the better of me which resulted in two more tacks to make the line. At 0600hrs in the morning just as the day was beginning,  I found the finish marks against a busy backdrop and successfully crossed the line with both the boat and myself in one piece. To my surprise I discovered that I was the first Grand Surprise to finish. When I approached the mark at the other end of the lake, I was in a group of about 6 boats and definitely not in front. At the finish, 40 miles and 8 hours later I was ahead. To me, this result was validation. I did not know the lake, I did not know the boat but I had used my instincts to make the boat go fast. I was tired but delighted and buzzing. I was welcomed home to the yacht club to relax with a good meal of pasta and a drink. I certainly slept well on Sunday night!

It is a great event and one I would recommend to anyone. A wonderful backdrop and a true test of skill. The competitors are friendly and welcoming, and the sailors are keen to share the complexities of their lake with you. I loved getting back to solo sailing and thoroughly enjoyed the racing. I very much hope to return and take part again.

Previous Sailing in the Solent
Next Ocean Obs’19
Dee Caffari